Around 1883, Bishop's College moved to its present campus on AJC Bose Road in Kolkata and has served to prepare Christians for the priesthood as well as train catechists and teachers ever since.

Bishop's College began as an Anglican college but with the formation of the Church of North India (CNI) on 29th Novemeber, 1970 become a College owned and managed by the CNI. However, it is a college that is ecumenical in its outlook and has teachers and students from many non-Roman Catholic Christian Traditions.

The current logo of Bishop's College is fairly new and dates back to 1971–72 or the formation of the Church of North India. Since the logo was previously the same as that of the Bishop of Calcutta, his mitre and motto were retained.

It is essentially in the shape of a circle divided by a cross into four quadrants, each with a distinct symbol in it—the mitre, a bishop's crook, a bible and a cross. Similar to the logo of the Church of North India, a cup features as the centerpiece.

The bishop's Mitre: Derives from the previous logo and is a reminder of the history and tradition of the college. Bishop's College, with an intentional apostrophe, is so called because it was founded by the first Anglican bishop of Calcutta, Thomas F Middleton.

A bishop's Staff: The crook or staff is used by shepherds and thus is indicative of the college's vision to train men and women for the service of the Church and prepare them for pastoral ministry. The staff is symbolic of the fact that all who come to Bishop's College are expected to follow Christ's example and be shepherds to their flocks.

The Bible: The interpretation and preaching of the Gospel is central to the theological task and therefore the Bible finds its place in the logo. It serves to enunciate the authority that comes from scripture, thus uniting the non-episcopal churches that joined the Church of North India in one fold.

The Cross: The Christian faith begins with a young man on a cross, put to death by imperial forces. The cross is a symbol with many meanings in Christianity. On the one hand it indicates that we believe in the way of the cross, in the way of living life for others as a means of salvation for all. On the other hand this speaks of the prophetic theological task to which Bishop's College aspires.

The Cup: While the cup is taken from the CNI logo, it is indicative of Christian unity; of sharing in one baptismal cup, signifying our covenanting and commitment to one another.

The sentence in Greek below the logo is best translated as 'Partners in the Gospel' and is Bishop's College's motto.

The foundation store for the chapel was laid on 9 May, 1898 by the Metropolitan and Bishop of Calcutta, Edward Ralph Johnson and dedicated on 19 January, 1900 by his successor,JEC Welldon in honour of the Apostle Thomas who is believed to have preached and been martyred in India.

It is a small basilica similar to an ancient Roman hall with an apse and colonnades and a fine marble altar that was erected as a thanks-offering for the work of Rev. Dr. M. Whitehead, the principal of Bishop's College who oversaw its building. 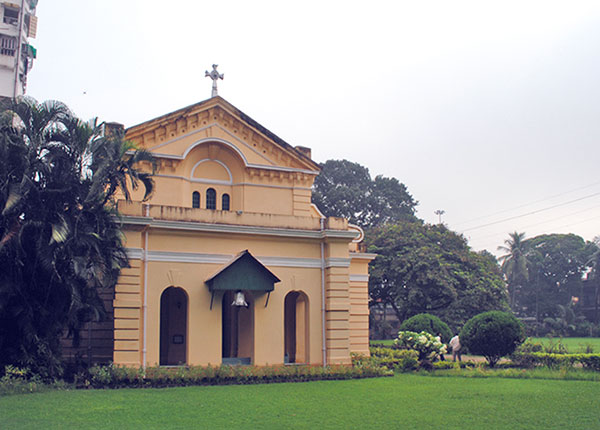